How to Choose the Right Cat Breed 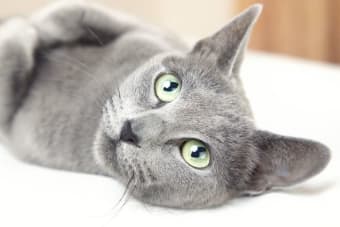 Considering adding a cat to the family? Our Perry vets shared a few of the family-friendly cat breeds that you may want to consider, as well as information about them so you can choose the best-suited breed for your family.

Picking the Best Cat Breed for Your Family

When trying to decide on the right breed of cat for your family, it is important to also think about the needs of the cat and what environment they are best suited for. Factoring in how long the cat will be alone, its accessibility to the outdoors, and even the size of the cat will help you make a more informed decision on which breed is ideal for you.

Take your time to find a cat that suits the space you live in, as well as the energy level of your family, and how much time the family can commit to caring for your new companion.

To help you to get off to a good start when choosing the best cat for your family, here are five of our favorite breeds.

This breed is a medium-sized cat that is descended from the Siamese and Persian breeds. It is very similar in appearance to the Persian in many of its physical features. Possessing the best characteristics of the Siamese and Persian breeds, Himalayans make for great indoor pets. They are very loyal and affectionate which means they require lots of attention and love but have been known to play favorites if they have more than one owner. They are very social, sweet, and intelligent, and have been known to be rather talkative.

Their activity levels lie between those of the Siamese and Persian, so they are just as happy to play as they are to relax and lounge around, making them great family companions.

Himalayans usually weigh around 5 kg, but females generally weigh less than males. This breed of cat has a lifespan of 9 to 15 years.

The Ragdoll is a relatively new breed of cat, but also one of the world's most popular at the moment. Ragdolls are born completely white in which their face, ears, and tail darken as they age. Their large, wide-set eyes are a gorgeous shade of blue. They are one of the larger cat breeds, with a more muscular body compared to other breeds.

Ragdolls are extremely laidback and peaceful and were actually named after their tendency to go limp when picked up because of their relaxed nature. They are playful and relatively easy to train. This breed is also known to greet you when you arrive home and follow you from room to room.

Ragdolls love the company of humans and won't wander too far from their families. However, Ragdolls are strictly indoor cats and should only be allowed outside if on a leash or in an enclosed area. They have been known to be more sociable than other breeds, similar to dogs in some ways, and get along great with strangers, kids, and other pets. Unlike many cat breeds, the Ragdoll doesn’t like to be left alone.

The Russian Blue is a medium-sized cat that is quite unique and athletic in appearance. It has a striking, bluish-gray coat and a mesmerizing, deep bottle-green eye color. Its soft fur is almost like velvet and they do not shed very heavily, making them not technically hypoallergenic, but ideal if someone with light to mild allergies will be in contact as the Russian Blue is less likely to cause an allergic reaction.

Russian Blues enjoy the company of their humans and will most likely follow them all around the house. They are ideal cats for families and don’t mind children at all, although this is another breed that may choose a favorite and stick with them most of the time. While they are comfortable with their own family, they may become nervous and skittish around strangers.

Like a lot of other cat breeds, the Russian Blue is a creature of habit and they love routine.  They like to be fed at the same time and follow the routine of the family home.

This is a clever breed that can even be trained to fetch and play other games. They are, however,  also happy to spend some time alone and keep themselves amused.

The average weight of a Russian Blue cat is 7 to 15 lbs with male cats weighing in heavier than females generally speaking. Their natural lifespan is usually around 15 to 18 years.

The Scottish Fold is a medium-sized cat with a rounded body and unique ears that fold forward and down. Their ears appear normal at first, but fold over as they grow. the folded ears in addition to their round head and wide eyes almost give their face the appearance of an owl.

Ideally suited to indoor living, the Scottish fold has a very easy-going nature and a great personality. Not much bothers this breed as they adapt to just about any environment and don't seem to mind traveling. It is the ultimate couch potato that fits in well in any household, even one with other animals and/or children. They are also rather sneaky and bold as they have been known to use their paws to open cabinets to find something to play with, play fetch, or sneak food.

The Siamese Cat is one of the world’s oldest and most popular cat breeds. Its appearance is quite unique and recognizable, with a light-colored body and a darker face, paws, ears, and tail. Their large, blue, almond-shaped eyes are another recognizable feature.

Siamese Cats are highly intelligent, sociable, and talkative. They have a deep, loud voice and enjoy “talking” with their owners. They have been described as “dog-like” in their desire for affection and their fondness for playing fetch. Similar to dogs, they also need lots of toys and playtime to keep their body and mind occupied.

While they are great indoor cats, Siamese cats require a lot of human attention to stay happy, especially if they are indoors. This breed may not be best suited for owners who would leave the cat alone for extended periods, as aside from requiring lots of attention, they are known for getting up to no good when left alone.

Male Siamese Cats weigh between 9 and 15 lbs, while females weigh around 5.5 to 10 lbs. Their expected lifespan is 15 to 20 years, though some have been known to surpass this.

Are you looking to add a new feline friend to the family? Contact our Perry vets who can help you pick out the right cat for you.

Looking for quality veterinary care in a warm and friendly atmosphere? Westmoreland & Slappey Animal Hospital in Perry, GA is accepting new patients! Get in touch today to book your pet's first appointment.